Who Put the Fox In Charge of the Chickens? 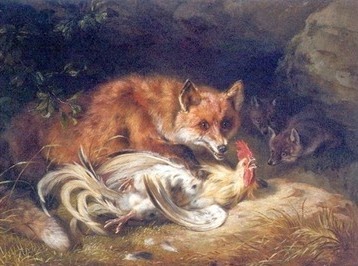 Once upon a time all of the farm animals decided to put the Fox in charge of Chickens!?
Obviously the Chickens didn’t want to be ruled by the Fox!   So “HOW ON EARTH DID THIS HAPPEN?”  Well truth is often stranger than fiction, and evil often masquerades itself as good.  Let’s have a look at what happened.
The Fox was a very shrewd fellow and knew how to make the most of a situation.  He noticed a commotion happening at the farm and seized the moment.  Some of the greediest ‘Capital’ animals namely the Eagle, the Bull Dog, the Cow and the Kangaroo were concerned about the growing number of ‘Commune’ animals and so with a little prompting from the Fox they decided that the best way to stop growth of the ‘Communers’ was to allow the Fox to rule over the Chickens.  And the deal sweetener was that the Fox would share the Chickens’ eggs with the Greedy ‘Capitals’.  The Greedy ‘Capitals’ loved the free eggs (the Freeport Golden Eggs) and rationalised to themselves that the Chickens were too ‘primitive’ to look after themselves.
The Fox was the cruellest of rulers and the Chickens kept crying and waling and many of the Chickens ‘mysteriously’ disappeared.   Often the Fox was found with feathers in his mouth.  But the greedy Eagle, Bull Dog, Cow and Kangaroo covered their eyes and ears and continued to enjoy the free eggs that the Fox kept giving them.
Some of the other farm animals started to ask “What is going on?” Why are there so many feathers everywhere?” And “Why can’t the Chickens be free to look after themselves like the rest of the animals?”
This is when the Greedy animals had to think of something that would appease their own nagging consciences and befuddle the minds of the other animals.  This is when the Greedy animals came up with their ‘Unilateral Official Statement’: “We respect the territorial sovereignty of the Fox to rule the Chickens.”  And that was that!!
The Fox continued to have feathers hanging out of his month and the Greedy Eagle, Bull Dog, Cow and Kangaroo continued to have egg yolk running out of their months!